To read PDF (portable digital files) documents, you will need Acrobat Reader. It can be downloaded for free at: http://get.adobe.com/reader/

The origin of the DCS position at TWA dates back before the widebody era, and can probably be credited to the Director – Passenger Service (DPS) at Continental Airlines, a position that began with that carrier's Boeing 707 "Golden Jet" service in 1959. The DPS position was somewhat different, in that he (all were men) actually collected tickets on board. With Continental's "instant boarding" program, passengers were able to board a flight without a ticket and purchase one after departure. It is not clear how much authority the DPS had over the four "hostesses" in the cabin, but the position was heavily marketed in Continental's print advertising and included reference to the fact that he had his own "radio-telephone" system available to make airline, hotel and car rental reservations. (Later, when Continental inaugurated its first 747 service, the airline actually assigned two Directors on each flight, although by then they may have discontinued ticket collection. It is not clear when the position was dropped altogether.)

Other than Boeing 707s versus DC-8s (and later, Convair 880s), none of the airlines had much of a competitive edge. Meal service was enhanced, as with TWA's famous Royal Ambassador Service that was introduced on international flights soon after the jets arrived, and terminals were upgraded with loading bridges – or Jetways – along with other amenities, but only Continental had upgraded its in-flight image with the DPS.

We can thank Continental Airlines for planting the DCS seed at TWA.

At TWA, our Terminal Service staff began looking for that competitive edge and proposed replicating Continental's DPS program by putting a member of management on every 707 flight in order to provide the highest possible level of passenger service. For lack of a better title, the DPS designation was used in the proposal. Three station supervisors were selected to test the program. Among them were two gentlemen who would later experience a close relationship with our DCS program, Jim Dolin and Dick Veres.

Armed with an Official Airline Guide (OAG), they met and greeted passengers, assisted with hotel and car reservations and made appropriate on-board announcements, much the same way as their counterparts flying Golden Jets 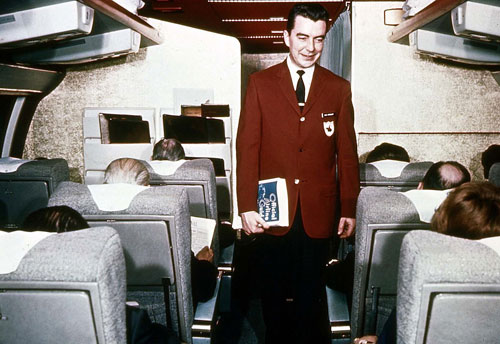 The DPS program did not fly at TWA for one basic reason: financing. The company was still recovering from the end of the Howard Hughes days and trying to catch up with the larger jet fleets of American and United.

Fast-forwarding to the early 1970s, TWA leapt into the widebody jet era as the second carrier to begin 747 service, following Pan Am by only a few months. With this huge airliner that more than doubled passenger capacity over that of the 707, a decision was made to add a new cabin attendant position; enter the Flight Service Manager. On international flights, the Purser position remained as well. Early TWA 747 flights were, to put it kindly, a bit disorganized. After a few months, it became obvious that the transition from narrow to widebody needed more than an upgraded Purser to pull it all together. 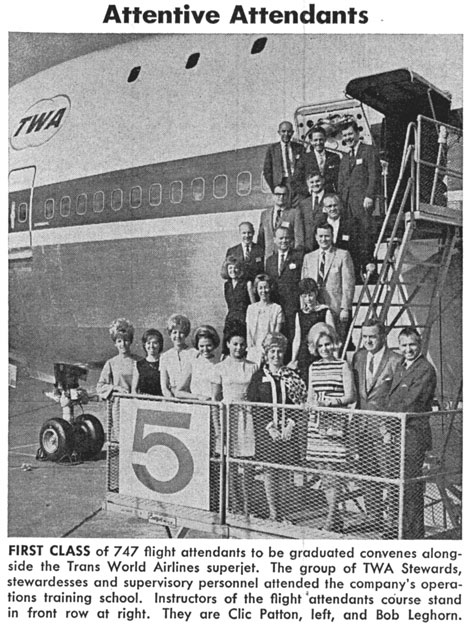 The number 5 on the steps refers to aircraft line number 5, which was N93101. At the time, it was still in the test flight program, and did not have a fully furnished interior; note the bare passenger door above Ernie, Les and Des. Also, the word EXPERIMENTAL can be seen next to the number 1 door.

TWA management turned to the same solution it had long relied upon, yet another task force! This one was named the 747 Cabin Attendant Supervisory Task Force. From that exercise came a proposal to implement the pre-jumbo plan for a management representative to be placed on each 747 flight, and to do it as soon as possible in order to "improve the service level on the B747 flights."

By the summer of 1970, the easy decision had been made. Yes, we would implement the "747 Supervisor" program, hopefully by June 8, because the first class was to graduate on June 4. Then followed the more difficult challenge: how would this program interface with In-Flight Service management, as we know it today? The battle lines were drawn. Dick Veres became the manager of 747 In-Flight Service based at JFK where the supervisors would all be initially based. However, there was already in place a management team in charge of the domicile led by Anita Boylan.

Many questions were left to be answered as the actual 747 Supervisor position evolved:

Somehow we got up and running, and made peace with entrenched In-Flight management folks. The turf battle at JFK resulted in a new position: Manager – 747-In-Flight Service, filled by Dick Veres. Group Supervisor positions evolved, and were awarded to familiar names including Ron Green, Rod Gaines, Leif Hansen, Ralph Wilson and others. Gray business suits became uniforms. Once established, the title of Director – Customer Service came into being as our group began establishing a relationship with not only the cabin attendant crew, but also with three men (yes, they were all men back then) on the upper deck, including the one really in charge, known simply as "Captain." This presented one of the major challenges confronting every DCS as he or she began a new career. Some of the stories regarding this transition have become folklore and are repeated annually at DCS reunions. 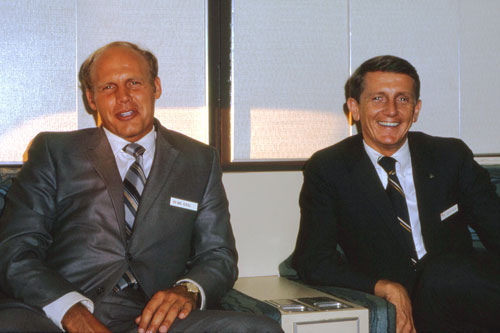 I applied for the position in 1970 and was turned down, being covertly informed that my weight was a major factor in the decision. I became even more interested in the job when I learned that the two DCS recruiters, Hank Krueger and Bob Leonardt, had both abandoned their positions in favor of the DCS title! 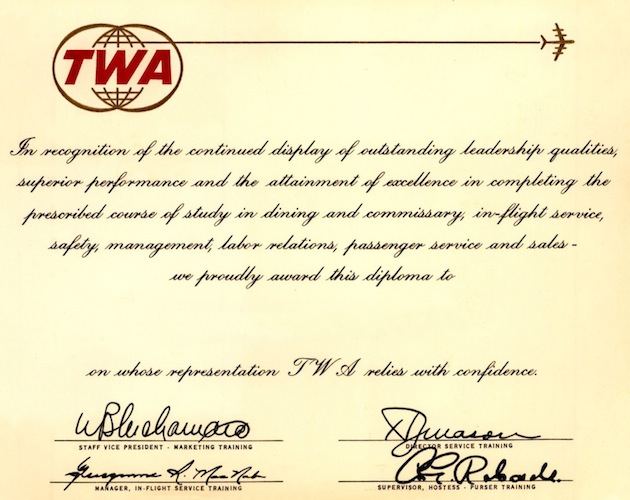 After leaving TWA briefly and losing some weight, I was finally selected for DCS position in mid-1971 and began training at Breech Academy on July 19. My class was generously sprinkled with furloughed pilots, a flight attendant and two pursers, plus representatives from Passenger Services. All of us were assigned to JFK, although by then, as I recall, a small DCS base had opened at LAX. My first "observation" flight, from JFK to LAX, was under the expert tutelage of DCS legend Bob Anderson, a former TWA sales rep, who could steal business from the competition like no one else. Among the other things I recall is the fact that he and I spent some time after the flight obtaining ticket endorsements from international carriers that had suffered substantial revenue loss thanks to Bob's persuasive powers with customers. One family of four, who were connecting to Hong Kong on BOAC, switched to TWA when Bob convinced the mother that her two children would be happier with us where they could watch a movie; at the time, BOAC was not showing films on its trans-Pacific flights; Bob knew every trick.

About this time, a great story on the DCS program appeared in our on-board TWA Ambassador magazine, ghost-written by Charlie Betz. Click here to read the story.

I flew out of JFK from September 1971 until the following April, when a DCS domicile at Chicago-O'Hare was formed in anticipation of the L-1011 introduction; ORD-based cabin crews were to fly all 1011 time initially, with service due to start in June.

I believe there were already five from our group at ORD (Penny Donahue, Dale Kreimer, Hank Krueger, Bob Henderson, and Bob Green) on somewhat of an ad-hoc basis, flying 747 Las Vegas turnarounds and two-day trips to LAX and SFO, with other DCSs temporarily assigned to fill in as needed. Bruce Megenhardt and I transferred to ORD and began working 747 trips.

As the L-1011 schedules came on-line, the Chicago DCS domicile grew quickly under GM Diane Croll and Group Supervisor Ralph Wilson. ORD was a great base, and our group held the distinction of being the only domicile that cabin attendants actually supported when polled in a survey. Naturally, some eyebrows were raised by those who wondered just exactly why the ORD domicile liked us while the others did not; fraternizing had nothing to do with it, of course … . 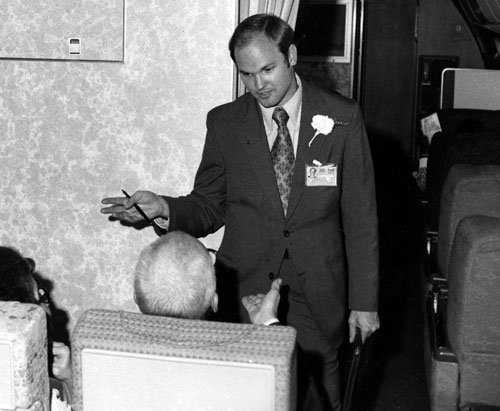 At the program's peak, there were DCS domiciles at JFK, BOS, ORD, LAX, and SFO. The narrowbody DCS Program evolved, adding an MCI base. Narrowbody supervisors undertook a slightly different course, with much less visibility on flights and more emphasis on market segments, hence their titles of "Market Segment Director of Customer Service, per the below certificate. 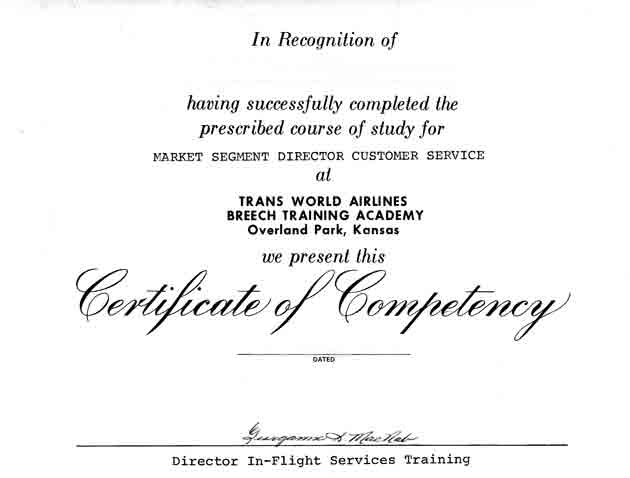 By the end of 1974, TWA was flying 19 747s and 24 L-1011s. Although six more TriStars would be added in 1975, an equal number of 747s departed for Iran as our airline faced bleak financial times. Throughout the DCS program, furloughs were avoided by very creative scheduling that included bunching vacations into off-peak seasons ... Does anyone remember "Kitzmiller's Peak?" 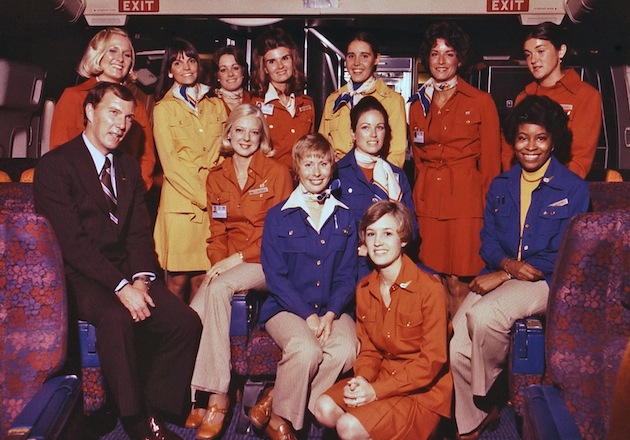 I left the program in April 1974 to take a corporate staff position at 605 Third Avenue, New York, rejoining the DCS ranks almost exactly two years later and resorting to a lifestyle that I'd become accustomed to. Flying once again from JFK, it didn't get any better than this, and I expected to remain a DCS until retirement.

We were all holding our breath during that spring of 1976 as talks between the flight attendant union and TWA management broke down. I was on a San Francisco layover June 4, when the 30-day cooling off period ended at midnight with a contract agreement. As I checked in at operations the next morning, an agent told me to call the New York In-Flight office. The news was good and bad; we had a contract, but at a price. The DCS program was to be disbanded. Soon, I would be a flight attendant supervisor, mostly on the ground, along with my fellow DCS comrades. By mid-September, it was all over.

Several of us had found an extension of the program with Saudi Arabian Airlines, on temporary assignments completing a similar job description as In Flight Supervisors (IFS), based at Jeddah and later London. Click here for a review of this program.

In retrospect, we can look at the other airlines. Continental, American and United all removed supernumerary positions from widebody jets. Perhaps we had completed the mission. By then, routine service aboard the jumbos was firmly in place. Coach lounges had come and gone, along with most of the frills. Nine-abreast seating on the 747 gave way to ten across, while the L-1011s increased from eight- to nine-abreast. The realities of airline economics in the '70s and beyond squeezed every dollar of profit. We were among the casualties. And yet most of us would not trade the experience for anything. We grew from it, and even the final chapter was a character builder.